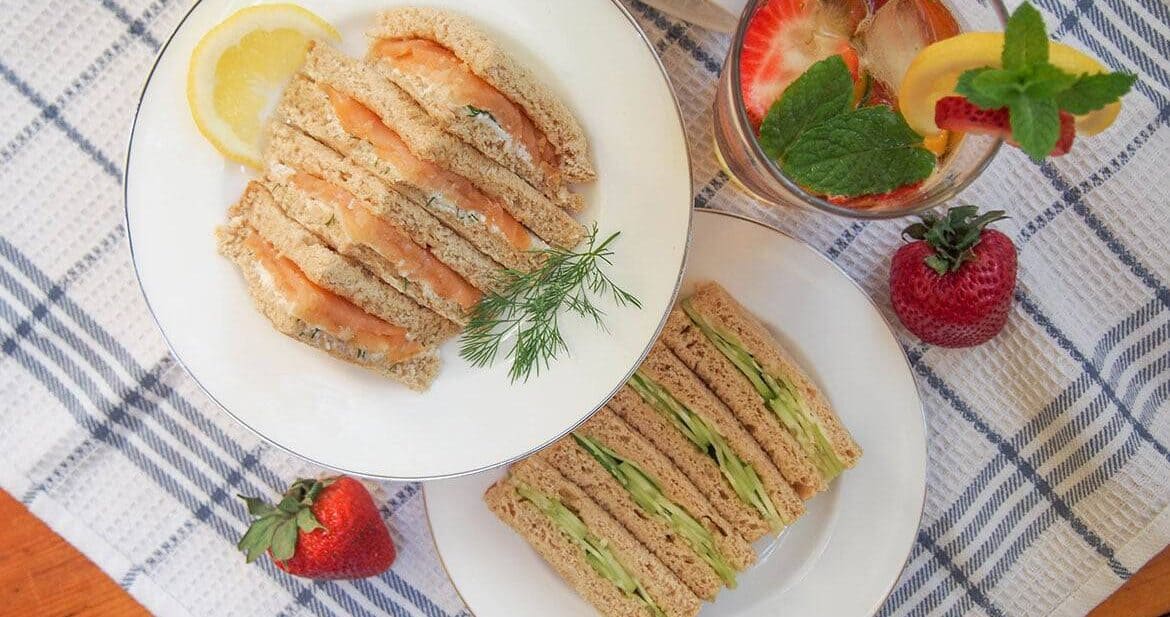 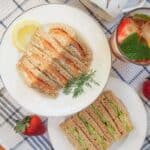 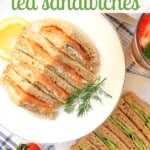 There is something special about English tea sandwiches. They are dainty, they are tasty, they know how to make people feel special!

We are excited to share with you our absolute favorite Easy Party Sandwiches filled with cucumbers and salmon – OH my!

If you want to get properly in the spirit of Wimbledon food tradition as you watch the tennis, you can’t forget the English Tea Sandwiches. They’re almost as iconic as a Pimm’s Cup Cocktail and strawberries and cream.

Or if you’re not into tennis, just find any excuse to serve these easy, dainty cucumber tea sandwiches, ideally with a cup of tea.

While you might associate English tea sandwiches with watching Wimbledon, they’re truly a classic part of English food culture.

Sandwiches, in general, are very popular for lunch and come with a huge variety of fillings. What’s typically known as tea sandwiches is very simply in their most traditional form.

If you are ever visiting England, it’s worth hunting down a good “high tea” where you can enjoy the wonderful tradition of tea sandwiches, pastries such as scones and little pastries and, of course, a pot of tea.

You’ll find it served in many high-end hotels as well as some cafes. It’s also something that you’ll find in other parts of the world, especially former British colonies.

How to Make Tea Sandwiches?

As I say, English tea sandwiches are not complicated, but that’s part of what makes them special:

Here I’m sharing two of the most iconic fillings, which also go really well together: cucumber and butter, and smoked salmon and cream cheese.

Other classic fillings include tuna salad, egg salad (sometimes with cress), and ham (maybe with mustard or horseradish).

The cucumber tea sandwiches are traditionally made with white bread, so I am slightly off in using white whole wheat bread here, but that’s just my preference – use as you prefer.

Peel the cucumber – that saves it being bitter – then cut into wafer-thin slices. Don’t bother with herb butter, just a good plain butter is perfect, slightly softened for easier spreading.

The smoked salmon tea sandwiches are just as simple. I’ve added a little bit of dill to the cream cheese, and you could also add a few capers, but nothing more.

Spread the cheese mixture on one side then top with smoked salmon. Put on the top slice of bread then cut.

For all sandwiches, the last step is to remove the crusts, cut them up and serve. You don’t want to leave English tea sandwiches sitting around for too long as the bread will start to become slightly stale.

So find your finest tea, grab some bread and your fillings and make some English tea sandwiches. Will you enjoy them watching Wimbledon or what about serving your own high tea? Let us know how you enjoy them!

📌 Pin English Tea Sandwiches to save for later! 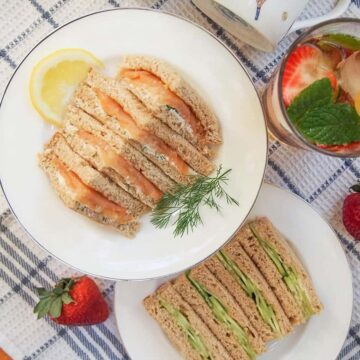 For the smoked salmon sandwiches

Try these other classic British dishes: