Home » Recipes » Side Dishes » How to Make Sprouted Bread at Home

We love a good easy sprouted bread recipe. Once you learn how to make sprouted bread at home, you will want to make it for your family again and again!

Our sprouted flour bread recipe is light, flavorful, and full of goodness. You can feel good about feeding your family this nutritious loaf. It’s one of the best bread recipes you can make at home!

What is sprouted bread?

It is bread made from sprouted grains. Sprouted grains for bread might be seen as something relatively new, but the tradition is actually old enough that it has Biblical references.

Ezekiel bread is based on a centuries-old tradition of making bread with a mix of sprouted grains, lentils, and seeds. You can make sprouted bread from a lot of different grains and legumes such as rye, spelt, millet, oats, barley, and soy.

For this sprouted bread recipe, we’ve kept it relatively simple, using sprouted wheat flour and just a little oat bran (that’s not sprouted, but is whole grain) for additional flavor and texture. The result is an easy and deliciously flavorful loaf.

How to Make Bread with Sprouted Wheat

You can make bread from different grains which may be gluten free, but this particular bread is made with sprouted wheat flour.

Being wheat, it is not gluten free. That said, while it still wouldn’t work for those with allergies, some with mild gluten sensitivities find sprouted bread easier to digest.

Is sprouted wheat bread good for you?

Yes, it is made with whole grains, so it is certainly better for you than white bread.

However, it is also arguably better for you than whole wheat bread. Sprouted wheat is higher in protein and fiber, lower in carbs, and has a lower glycemic index.

It may be easier to digest, which means your body is better able to get the nutrients out of the bread, as well.

How long does this bread last?

It will keep for five days when stored in the refrigerator.

Can I freeze Sprouted Grain Bread?

You can store it in the freezer for up to two weeks.  When ready to use, just pull from the freezer and defrost on the counter for a couple of minutes. It is delicious when toasted and topped with butter or jam.

My family and I were pleasantly surprised by how good this bread recipe tastes. It’s not often you find the magical combination of bread recipes that are good for you, not too heavy and full of fantastic flavor.

This bread is relatively simple but oh-so-delicious, and definitely a loaf we’ll be making more often. If you want to try some other bread-making projects, give one of these a try:

What did you think of this bread recipe? Let us know in the comments below your experience with making sprouted grain bread!

📌 Pin How to Make Sprouted Bread to save for later! 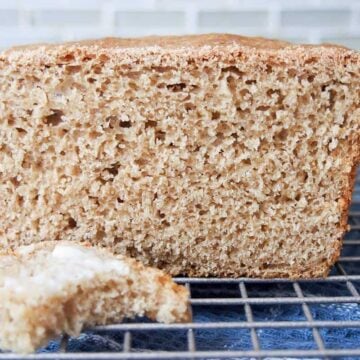 How to Make Sprouted Bread