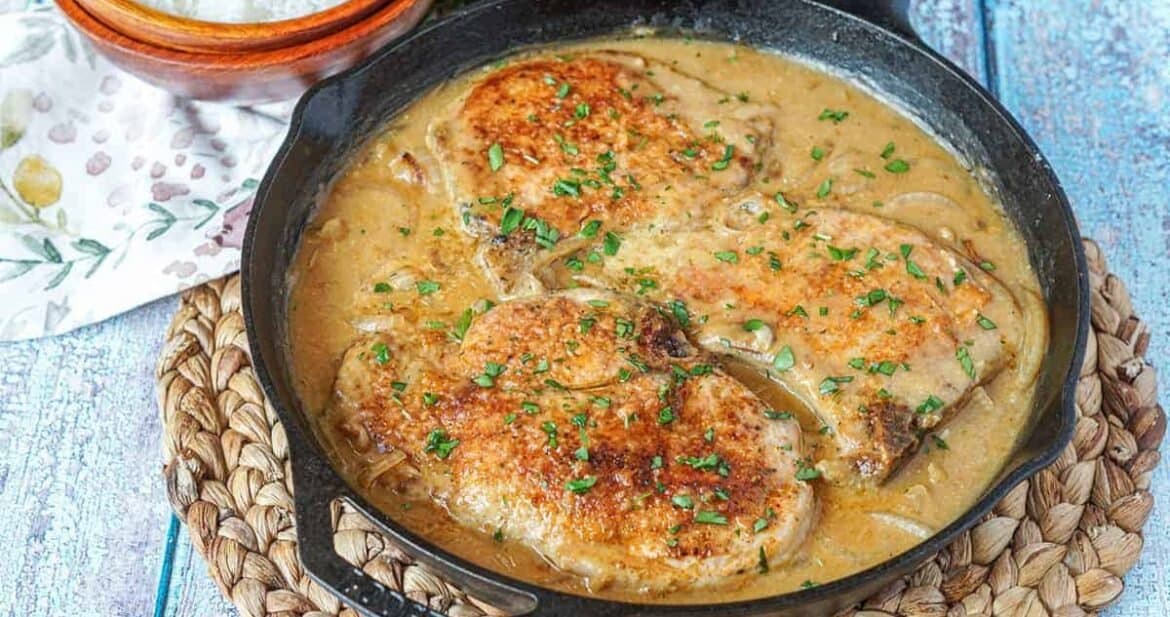 You’re going to love my Southern Smothered Pork Chops recipe! These lightly breaded, tender pork chops simmered in a rich and creamy onion gravy make a family meal everyone at the table will love. Pork chop recipes just don’t get any better than this!

The first recipe for smothered pork chops that I ever tried was one from the Pioneer Woman. I immediately fell in love with the gravy! Typical of me, I love recreating recipes to make them my own. To be completely honest, I have a hard time following recipes. I just can’t help myself. I love tweaking and adding a little bit of this and a little bit of that and so you have it. Here is my recreated Pioneer Woman-inspired Southern Smothered Pork Chops recipe. My family loves this recipe and so will yours.

What are Smothered Pork Chops?

They’re called “smothered” because of the cooking technique used to make them. Smothering involves cooking your food in the liquid, in a pan with a lid over low heat.
This is a classic Southern dish and one of the best comfort food recipes ever! Pork loin chops are coated in seasoning and flour, then pan-fried golden-brown and simmered in a rich, creamy onion gravy.

How do you cook pork chops so they aren’t tough?

That is the beauty of this dish. “Smothering” the pork chops, or slow cooking the pork chops in the sauce, results in the most tender pork chops. This is absolutely my favorite thing about this recipe, you never have to worry about the pork chops being tough.

How to make Smothered Pork Chops

How to make Pork Chops Gravy

Oh, how I love this creamy onion gravy! It is so rich and decadent and pairs perfectly with pork chops. It’s easy to make gravy using a roux and onions. This is one of the best Sunday dinner ideas! So easy and amazingly tasty!

You always want to check your pork chops to make sure they are properly cooked. When using the smothered method, it will not be a problem but I am a believer in always using a meat thermometer to check.

When they’re ready, pork chops should be cooked to 145°F at the thickest part of the chop. Always use a meat thermometer for best results.

Smothered Pork Chops in the Oven

I love making this recipe on the stovetop, but you can also finish them off in the oven instead. I like this idea for a busy weeknight. I will make everything in the morning and finish off this delicious pork chops dish in the oven.

Place the cast iron pan (or other oven-safe pan) in your oven preheated to 350˚F, after nestling the chops in the gravy. Cook for about 30 minutes, until tender.

Side Dishes for Pork Chops

If you’re wondering what to serve with pork chops, we have so many delicious sides to choose from! This is one of the best Southern Sunday dinner ideas – we know you will love it.

Our readers love this recipe!

I tried it! It came out great especially the gravy..I’ve always been challenged when it comes to making gravy but this recipe is actually good🤤 it! ❤️ Going to make it again, the gravy was excellent.

I tried it! It came out amazing! With some mashed potatoes and green beans! Yum!

My Pork Butt Recipe is a perfect Sunday Dinner Idea!

What to Do with Leftover Pork Chops 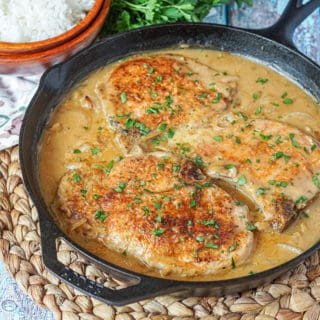