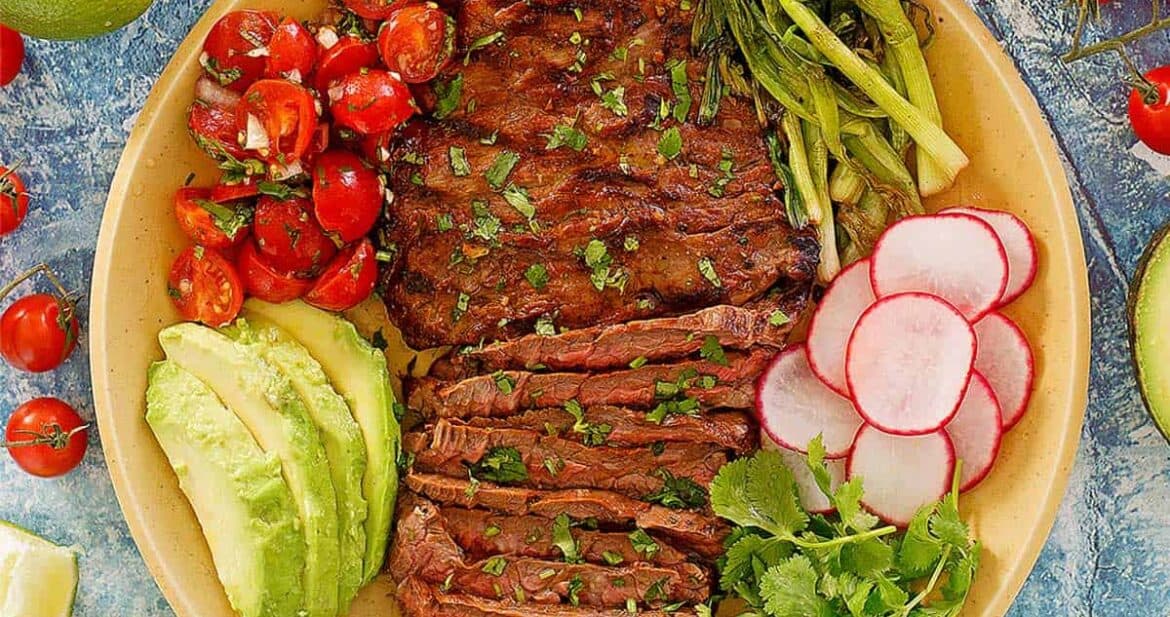 My Carne Asada recipe will be your new best friend for taco night! Using a simple lime and orange Mexican marinade inspired by traditional cuisine to tenderize the flank steak, this dish is effortlessly delicious. Cooks in 10 minutes after marinating!

My family loves Mexican-inspired recipes, and of them all, carne asada is easily one of our top 3 favorites. The aroma when the marinated beef hits the sizzling hot grill pan is heavenly! This is a perfectly grilled flank steak recipe with so much flavor, ideal for enjoying sliced on its own, over rice, or in tacos.

The best part about homemade carne asada is how easy it is to make. Marinate it a couple of hours before dinnertime, then cook it up in just 10 minutes. It’s beyond simple and so tender!

This recipe was just amazing. I made it for a party and everyone loved it!

What is carne asada?

Carne asada literally translates to “grilled meat” or “grilled beef”. It is a traditional Mexican street food typically served in tacos. The beef shines with a simple but flavorful Mexican marinade of orange and lime juice, which both enhances its taste and helps tenderize the beef to keep it juicy!

Is carne asada only used for tacos?

Carne asada is used for much more than tacos! You can enjoy it sliced on its own, in quesadillas, burritos, over rice, for fajitas, and as a base for any other of your favorite Mexican dishes.

What ingredients do I need for carne asada?

What cut of beef is best for carne asada?

Carne asada is usually made using beef skirt steak; however, flank steak and sirloin flap meat can both be used, as they are tender and flavorful cuts of beef. For example, I love Rick Bayless recipes, and he uses flank steak for his carne asada recipe. No matter which cut you use for carne asada steak, always cut against the grain for best results.

Are flank steak and skirt steak the same thing?

Though both cuts of meat look similar, skirt steak tends to contain more tough muscles than flank steak; however, following this carne asada recipe, both will turn out tender and incredibly flavorful. Both skirt and flank steak should be marinated first, then cooked to rare or medium rare for the most tender texture.

Do I cut carne asada before or after grilling it?

Grill the marinated steak in one piece, allow it to rest first, then cut against the grain. Slice the steak into thin strips after it has been cooked for perfect, juicy steak.

My carne asada recipe is naturally gluten and grain free.

To make carne asada keto-friendly, omit the orange juice and substitute apple cider vinegar. Orange juice contains a good amount of sugar, even when it is freshly squeezed.

How long does carne asada last after it is grilled?

Grilled marinated steak is good for up to 4 days in the refrigerator in an airtight container or covered with plastic wrap.

While you’ll find many recipes with steak require a long list of ingredients, most traditional Mexican recipes keep it pretty minimal, using citrus juice, garlic, and simple seasoning. My simple carne asada marinade is the same.

You can add some minced jalapeño if you want a bit of heat, or simply add it with your toppings later.

How to Make Carne Asada

This is a simple steak recipe that’s easy to make and perfect for a quick and delicious dinner. It just requires a little time to marinate, and then grilling is done in a flash.

How Long to Grill Flank Steak

Flank steak is much thinner than other cuts of beef you might be familiar with grilling, so to reach your desired internal temperature, it may not take as long to cook.

Remember, the steak will continue to cook once you’ve removed it from the grill. Transfer steak to cutting board and let rest 5 minutes before slicing. I always like to refer to a Beef Temperature Chart while using an instant read thermometer for the perfect temperature each time!

How to Make Carne Asada Tacos

Carne asada tacos are amazing. To make carne asada tacos, serve in tortillas of your choice with pico de gallo or salsa verde as a topping. Sliced tomatoes, radishes, and cilantro are also great choices. I like placing the tortillas on the grill for a short time to heat them up.

Try serving Carne Asada with grilled green onions. Place the onions on the grill whole while you cook the meat; then peel off the outer charred layer as you serve. This combo is so delicious and is a traditional way to enjoy carne asada, and even better in carne asada tacos!

What to Serve with Carne Asada 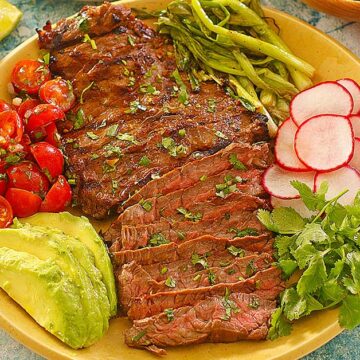