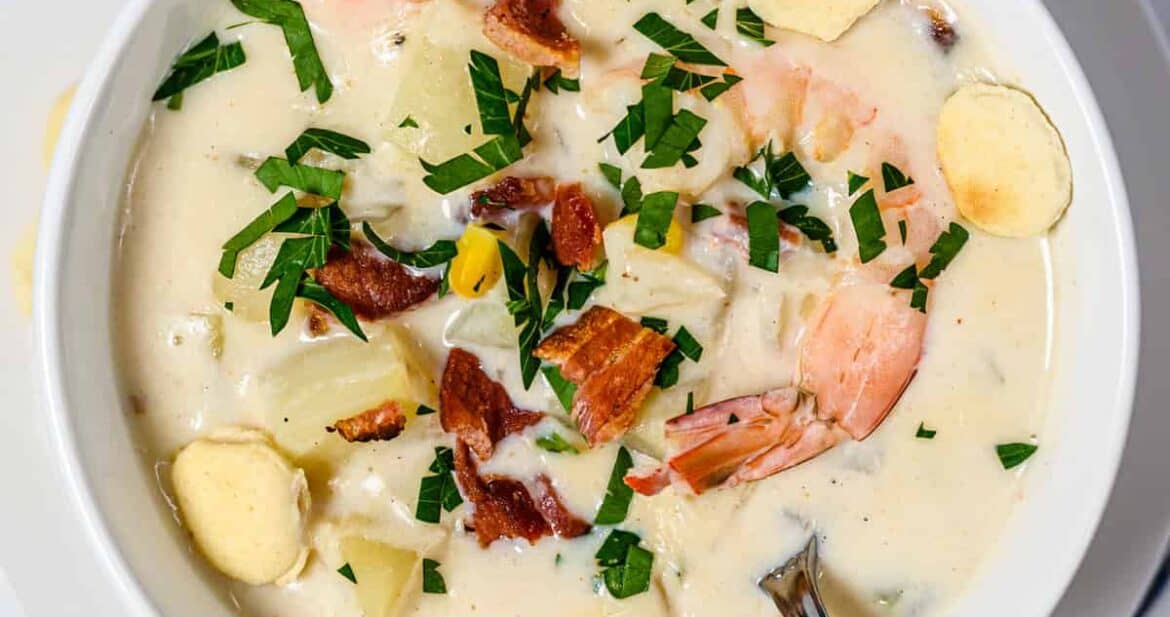 My easy New England Seafood Chowder recipe is ready in just 45 minutes using simple, fresh ingredients! Creamy, smoky, and overflowing with your favorite seafood. This is the best seafood chowder recipe for a quick and easy meal!

Chowder is a type of rich soup recipe with a creamy base, containing seafood and vegetables like potatoes, onions, and corn. I love seafood chowder using a mix of my favorite seafoods, but there are a few specific variations like clam chowder.

There is something so cozy and comforting about a bowl of creamy seafood soup with all your favorite ingredients! The best thing is, this easy chowder recipe is totally customizable!

Don’t like shrimp? Swap it out for mussels, clams, or more fish! Not a fan of white fish? Salmon works perfectly! It is really up to you how you want to put together this New England fish chowder, and that’s what makes it so great.

You can use fish (including salmon) and shrimp, or any shellfish you like to make a seafood chowder.

How do you thicken seafood chowder?

You can thicken seafood chowder using a cornstarch slurry (a mixture of cornstarch and water stirred into the hot chowder), or by making a roux. I prefer to make a roux (see: how to make a roux) as it adds flavor to the chowder. 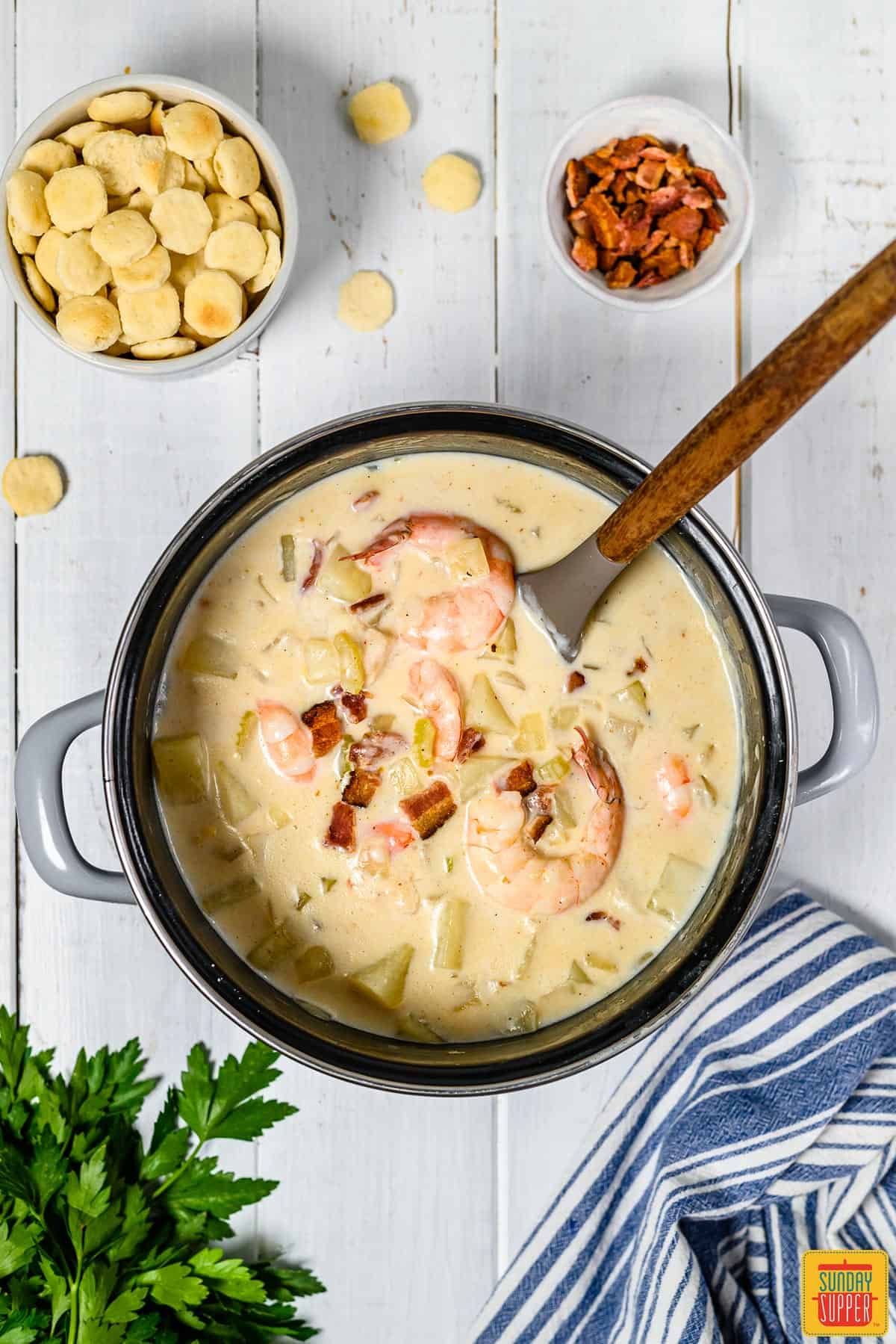 Can seafood chowder be frozen?

Yes! However, if you plan to freeze your chowder, you should use heavy cream instead of milk.

Allow the chowder to cool, then add to a covered, air-tight container or heavy-duty freezer bag. Label with the freezing date and store for up to 4 months.

When ready to reheat, reheat slowly and over low heat to avoid curdling.

You can use your favorite shellfish and swap out the fish for salmon if you like. It’s up to your preference! 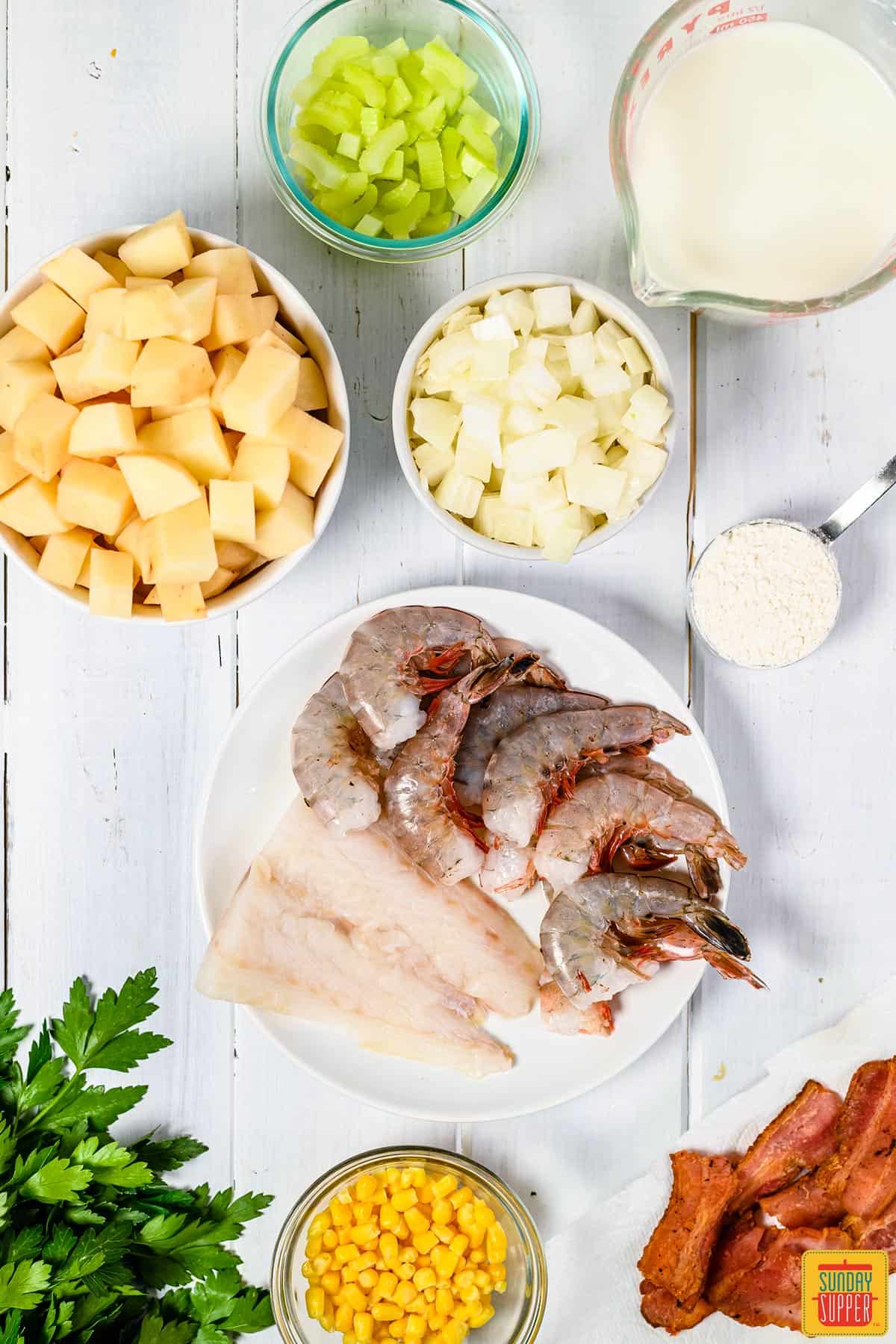 My seafood chowder recipe uses flour, so it is not gluten free. However, you can leave out the flour and thicken the chowder using a cornstarch slurry at the end of the cooking process.

How long is seafood chowder good for?

Properly stored in an air-tight container in the refrigerator, my New England chowder recipe will last 3-4 days.

Can seafood chowder be reheated?

Yes! Reheat over low heat on the stove, while stirring, until heated through.

What goes well with seafood chowder?

This tasty fish chowder recipe can be served with fresh bread and butter or traditional soup crackers. Garnish with fresh parsley or chives for extra flavor and a little green! Fresh corn is an excellent side dish for seafood chowder.

There are so many ways you can adjust this recipe to your liking. Here are some different options to choose from:

This seafood soup recipe is honestly so easy to make, and tastes absolutely delicious! It makes enough for four servings, so in a smaller house, you may even have enough for leftovers.

Did you make this recipe? Let me know what you think the comments below and with a rating! I love to hear from you! 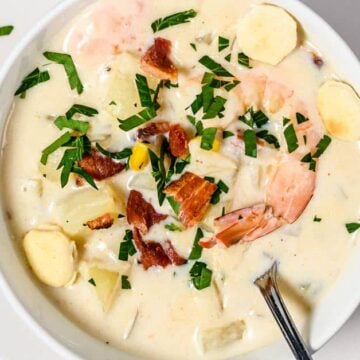