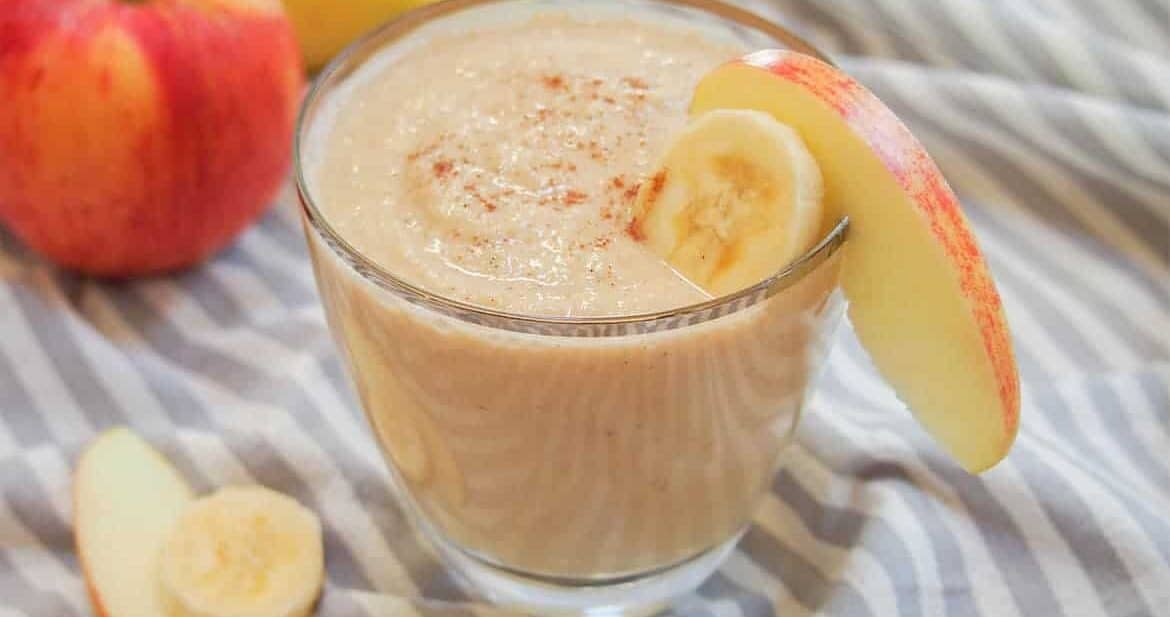 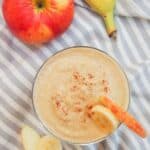 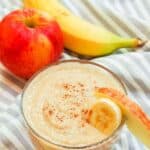 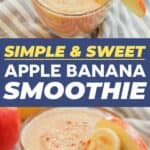 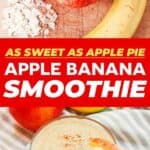 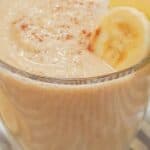 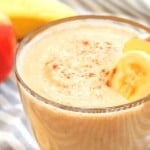 Like drinking apple pie without all the guilt! Our easy Apple Banana Smoothie is thick, fruity, and really easy to make in just 5 minutes. With wholesome ingredients like banana, apple, yogurt, oats, and a sprinkling of cinnamon, this apple smoothie recipe is a home run!

Imagine the taste of an apple cinnamon pie in a smoothie! With just a few wholesome ingredients, you can make this delicious smoothie for breakfast, lunch or even an afternoon snack. It’s one of our favorite healthy smoothie recipes!

My kids are big fans of smoothies. They go through phases when they want them all the time, then other times forget them completely. But if they see the blender going, they know there’s a pretty good chance it’s a smoothie and their heads pop up to have a look!

I’ve made a number of different smoothies before, and most of them have become quick favorites, like my easy dairy-free green smoothie.

I also love making this healthy blueberry smoothie with rolled oats and might even get the kids involved making a green apple smoothie!

This easy apple pie smoothie makes a delicious, naturally sweet smoothie. A pinch of cinnamon adds that warm taste of fall to this apple banana smoothie recipe. Honestly, you’ll want to make another blender full after you try it!

How to Make a Banana Smoothie with Apple and Cinnamon

That’s it! Just three steps and 5 minutes, and you have a delicious sweet smoothie recipe to enjoy. It just doesn’t get any easier than that!

Smoothie recipes with Greek yogurt are a great quick and easy way to fuel you up for the day, or to have a satisfying snack without the effort!

Plus, smoothies are great for getting kids who might not be that into fruit to eat some, or at least to enjoy more. If you have picky kids who won’t eat fruit, try this apple pie smoothie!

Tips for How to Make the Perfect Smoothie

How to Make a Smoothie Thinner:

How to Make a Smoothie Thicker:

How to Make a Smoothie Less Sweet:

How to Make a Smoothie Sweeter:

This banana apple smoothie is an easy and delicious combination your whole family will love!

And definitely give our deep dish apple pie and French apple galette a try! 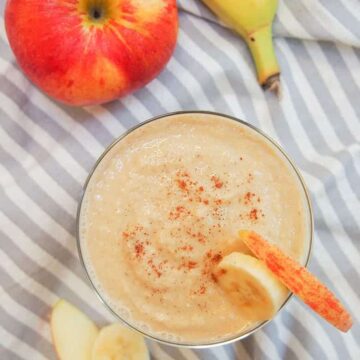 Previous Post: « Best Ever Recipes: Top Recipes of 2019
Next Post: How to Make Pulled Pork – the best pulled pork recipe ever! »