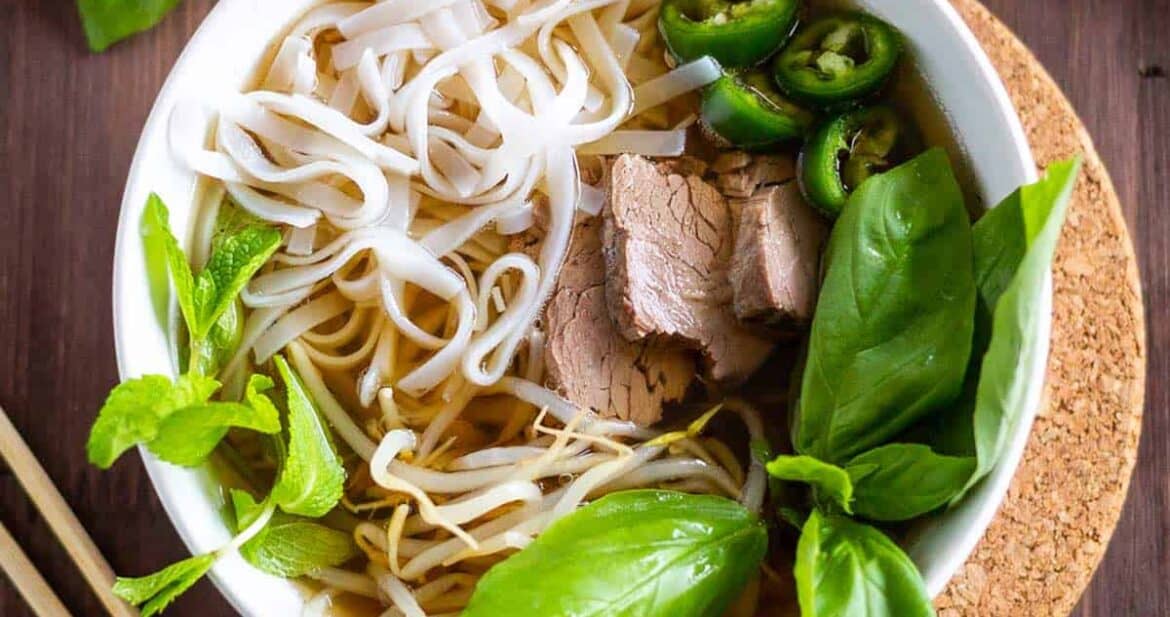 Make restaurant-quality beef pho right at home in less than an hour following our Instant Pot Pho Recipe! 🍜 It’s light and aromatic, but packed with rich, warm flavors. We know you’re going to love this dish!

When you think about Vietnamese pho, quick probably is not the word that comes to mind. The broth usually takes hours to simmer and build up flavor.

That’s what makes this quick pho recipe so special: it’s an Instant Pot recipe, so it takes under an hour to make without missing out on any flavor!

Our Instant Pot Pho is deeply flavorful, with an aromatic beef broth, fresh herbs, and strips of steak. I guarantee you’re going to love this dish. It’s one of my favorite cold weather recipes and is perfect for a rainy day!

What kind of noodles do you use for pho?

Pho is traditionally a rice noodle soup. We use narrow rice noodles to make this dish.

However, instead of rice noodles, you can also use ramen noodles, vermicelli, udon noodles, or even angel hair pasta.

Do you need to soak rice noodles before cooking?

No need to soak the rice noodles before cooking them. Simply prepare them according to the package instructions by boiling in water, drain well, then add to the broth when serving.

What is the best meat for pho?

Sirloin steak is the best meat for beef pho. You can also use flank, eye round, London Broil, or any other lean beef meat!

We also use beef soup bones to fill out the flavor of the broth.

How do you thinly slice beef for pho?

To easily cut steak for pressure cooker pho, remove it from the broth after cooking, then slice thinly against the grain. It should be tender and cut easily.

If you want to slice it before cooking, freeze your beef for 15-20 minutes, then cut it thinly against the grain. Freezing it makes it much easier to slice.

Another option is to buy hot pot beef slices from your Asian supermarket, or even shaved beef sirloin sold for cheesesteaks!

You can also use leftover beef. Instead of adding it to the pressure cooker when cooking the broth, save leftovers to add to the end. Slice thinly and add to the broth when serving.

For our pho spices, we use a mix of:

Combined with onion, fresh ginger, and brown sugar, these spices give the Instant Pot pho broth so much flavor.

Yes! Our Instant Pot Pho is a great gluten-free recipe. Just double-check your soy sauce and fish sauce to make sure both are gluten-free sauces. 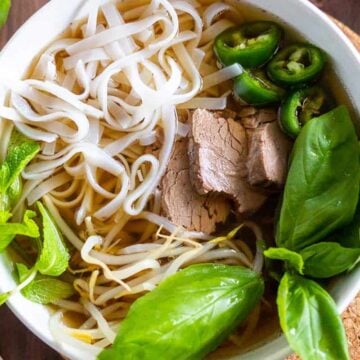