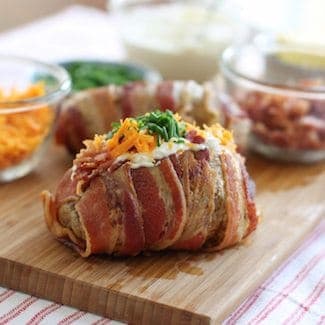 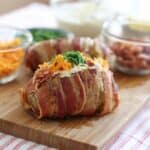 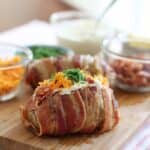 The Pigskin Loaded Baked Potato is covered with bacon then baked to a crispy exterior then filled with MORE bacon, sharp cheddar, sour cream and chives!

In my family, we have a game we play called Last Meal. And it goes like this: We go around the room (or sometimes car, as this game is often initiated on a long road trip when stops are infrequent and the passengers get fractious and hungry) and each person tells what their final meal would be.

You know, if they were scheduled for execution or somehow knew they would die the next day. The only rule is that you have to name specific, finite dishes. You can’t just say a seafood buffet, for instance.[/caption]

While my love of potatoes is not as well documented as my love of bacon, I feel the two often go hand-in-hand. What potato au gratin or hash brown is not improved by the addition of some crispy bacon?

I have no idea how the actual Pigskin Loaded Baked Potato – which the Packers call simply “The Pigskin” – is made but this is my version. And it’s a good thing. 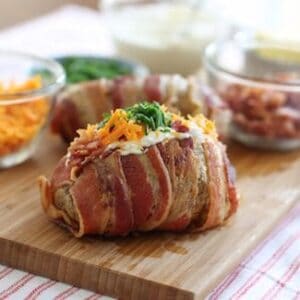 This is a full meal deal. Serve with a side salad or some veggies, if you want to feel more virtuous. But, fair warning; you may not be able to eat the whole thing if you do.

Stacy has lived overseas for 35 of her 54 years, calling six of the seven continents home and picking up recipes like souvenirs. She loves creating deliciousness out of fresh ingredients and writing about her expat life enriched by food. In addition to her own blog, Food Lust People Love, Stacy is the managing editor here at Sunday Supper Movement.